To: All Toyota Owners and the General Public. 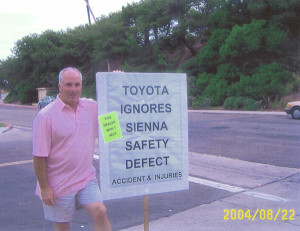 With approximately 3400 miles on the new car, wife Peggy was driving on Balboa Blvd.,
here in Newport Beach, California.

She was slowly accelerating from a complete stop in a small line of traffic.

She could see ahead of her that there were many pedestrians in the area and that the
cars in front of her were starting to slow again.

She went to apply the brakes but they did not stop the car. The car kept moving forward
and there was nothing she could do to stop the car. She was pressing on the brakes as
hard as she could and no time during the entire event did she ever pull her foot off of
the brakes.

Our 12 year old daughter called out to her saying “Mom, you had better stop the car or
you are going to hit the car in front of us!” My wife replied, “I’m pushing as hard as I can
but the car won’t stop!”

Faced with the rapidly developing situation, my wife avoided 3 pedestrians and
slammed into the back of a van, stopped at the crosswalk.

During this entire episode they never traveled more than 20 miles per hour.
There was an injury to a person in the van that she rear ended.

Immediately after the accident we reported the problem that we thought was “Brake
Failure” to the Dealership where we purchased the car and Toyota Motor Corporation.
After all, if the car won’t stop, it must be the brakes.

The dealership said that she screwed up, didn’t apply the anti lock brakes properly, was
following to closely or not paying attention. They did not take our concerns seriously.
Our car had major damage and a bent frame which I understand reduces the value of a
vehicle substantially.

The people that took the car immediately pulled the battery cable off and no information
stored on the computer could ever be found. The cars computer stores 30 of the last
ignition cycles in its memory.

We promptly requested a comprehensive inspection of the car be conducted by Toyota
to determine the exact cause of the failure(s).

I wrote Toyota many times regarding the matter and there was no response except to
say that there was no problem.

I called Toyota 20 times, and could never get anyone at Toyota to speak with me.
There was no response what so ever when we called the Toyota “Satisfaction
Experience” 800 telephone number and nobody would speak with me from Toyota
Motor Corporation.

I did the same with the Dealer.

We finally arranged an on site meetings with the upper management for Toyota of
Orange, the dealership where we purchased the car.

The dealer said, we don’t build the car, we just sell it. “Take it up with Toyota”
When we asked the dealer to buy the car back from us they refused saying that due to
the accident it had a bent frame and their policy would not allow it. Apparently a bent
frame on a vehicle reduces the value by about $5000.

We told them, “I got a lemon!”, and that there was something wrong with the car that
Toyota Motor Corporation and they need to discover and fix.

With no answers from anyone and knowing that there was still a problem lurking
somewhere within the car, I refused to drive the car ever again.

After the damage to the car was repaired, I refused to take the car away from the
Dealership.

Upon threats by the Dealer to have the car impounded, where I would be required to
pay for all impound and storage fees, I agreed to have the car towed to our home.
After a week of having it sit in the street, I drove the car 4 miles to another dealership
that was also owned by the original dealership where we purchased the car and sold
the vehicle back to them.

The morning after I sold the car to the other dealership and knowing that they had reregistered
it in their name, I sent them a fax explaining to them the entire problem and
that the vehicle had a safety defect. I WARNED THEM.

This other dealership (South Coast Toyota, Costa Mesa) must have sold the car to
some other unsuspecting customer without disclosing the fact that it was known to have
been involved in a traffic accident caused by an unresolved defect.

I took a complete bath on the re-sale of the car.

During this entire time period I was without a car for the family and I had to drive a rental
car for over 3 months.

I had to pay increase to our car insurance for 3 subsequent years due to the injury
accident.

I filed a full report with the NHTSB but they were unconcerned and said, “Did anybody
die?”

I filed reports EVERYWHERE I could trying to find someone to help me. I filed
complaints or spoke with at least 10 other consumer groups, automobile safety
organizations, government agencies and the like.

I wrote a letter to the President of Allstate insurance requesting their assistance in this
matter. They based all of their answers on Toyota’s internal investigation and findings
of the brake inspection and would not assist us any further.

In other telephone conversations with the insurance companies, the response was the
same…..”Did somebody get killed?” When I said “NO”, they abruptly ended any
investigation and deferred to the brake inspection report produced by Toyota.
I filed a complaint with Advocates for Highway and Auto Safety.

I filed a complaint with The Center for Auto Safety.

I filed a complaint and took my case to the California Dispute Settlement Program which
was in turn sent to the National Center for Dispute Settlement. They refused to hear the
case because the vehicle was involved in an accident.

I appealed the decision of the National Center for Dispute Settlement, but my appeal
was denied.

In my efforts to find out what the problem was with the vehicle I spoke to experts of
every kind regarding the mechanical aspects of the car.

I went on line to the official Toyota mechanics web site where I read and down loaded
hundreds of pages of testing procedures and maintenance procedures for the braking
system and computer system for the car. I became a resident expert.

I know there are other tests that Toyota could have and should have conducted on the
braking system but they failed to do so.

I tried many attorneys to assist us but none of them would take our case because it was
not classified under the “Lemon Law” for the State of California. Under the Lemon Law,
a car must have at leas 3 trips to the dealer to address the same problem.

Having little success with the Lemmon Law, I tried to contact several attorneys to take
my case against Toyota Motor Corporation. The attorneys all said that we would be
going up against TOYOTA, so you had better be ready to shell out BIG BUCKS and
there is no guarantee that you will ever win. I could not afford the risk so I had to drop
any legal action. Besides that, I hate law suits!

I went on the internet and spent hours trying to find others that were experiencing the
same problem. I was not surprised to find that there were others that had the exact
same experience we were reporting. Some that had accidents with injuries and some
without.

I wrote and called the local newspapers, The LA TIMES and The Orange County
Register. The response that I got from the newspapers was, “Toyota is one of our
biggest advertisers and we can’t bite the hand that feeds us!”

Left with no other avenue for our concerns, I physically protested, with my home made
sign, in front of the Dealership where we bought the car. A picture of me with my sign is
included as an attachment with this letter.

I was harassed and ridiculed by the sales staff on the lot.

I was threatened with arrest by the Management of Toyota of Orange.

The police were called and after some tense moments, I successfully exerted my rights
to peacefully protest under the Constitution of The United States of America and they
left me alone.

I walked up and down the street holding my sign and nobody would listen. I did this 4
times for about 4 hours each time.

I DID EVERYTHING I COULD TO GET TOYOTA TO LISTEN AND TO RECOGNIZE
THEY HAD A PROBLEM.

I did all of this not only to recuperate my losses, but so that Toyota would fix the
problem. I knew that if they did not address the problem, SOMEBODY WOULD
EVENTUALLY DIE.

I am not surprised to see what is happening in the news today with the Toyota defects
and all of the attention that it rightfully deserves.

I am however very sorry that so many other people have been killed and injured,
perhaps needlessly.

Could much of this have been prevented if Toyota had paid any attention to the
numerous complaints that were filed by me and others?

I lost nearly $20,000 on this episode and had at one time thought that it was a total
waste of time. My wife and I look at it very differently now in light of all of the events
that have recently taken place. We knew that something was wrong with the car.
Toyota wanted us to think that it was entirely our fault and that we were crazy.
The one thing that I am really proud of is that I never drove that car ever again. I would
not have been able to live with myself had I allowed my family to be at such a known
risk. I also know that I did all that I could do to spread the word about Toyota’s potential
problems.

Even as Toyota continues performing recalls to make minor fixes to the known defects, I
STILL DO NOT BELIEVE THAT THEY KNOW WHAT THE REAL PROBLEM IS OR
HOW TO FIX IT.

In my opinion Toyota had two distinct problems. One is an undiagnosed defect with
their cars and the other has been the total denial by Toyota Management to admit it and
confront it quickly.

All of the facts that I have provided here are true and I still have all of the supporting
documents.

Click here to view more videos and stories that have made National headlines.

Put the Brakes on Runaway-Vehicle Defenses